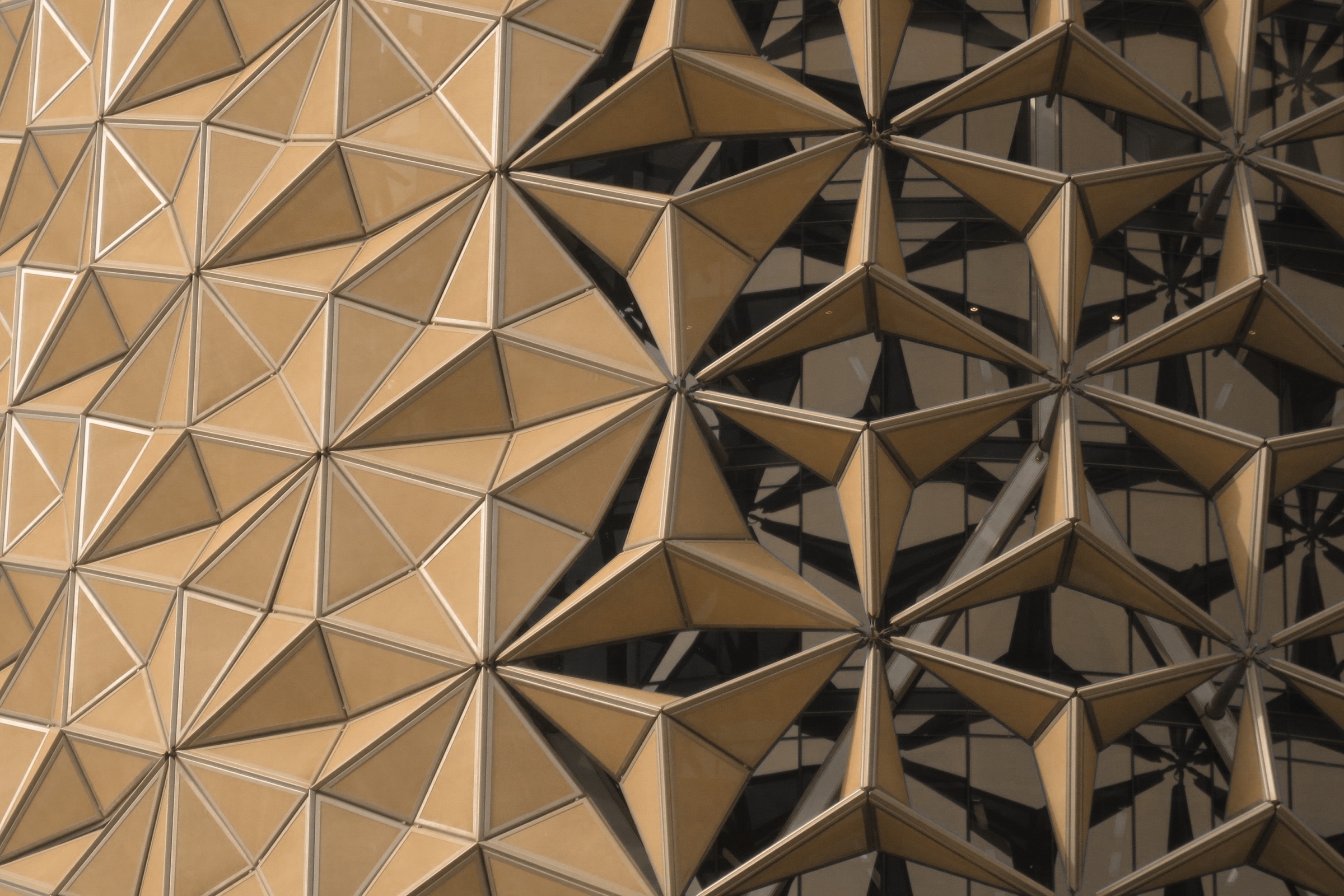 This time we will talk in detail about kinetic architecture, its applications and evolution.

We will focus specifically on kinetic facades, their applications and functionalities in today’s world.

What is kinetic architecture?

Kinetic architecture arises in history with the aim of enabling the mobility of some part of a structure without deforming it and providing a specific functionality, whether functional, aesthetic or energy efficiency.

That is why kinetic architecture can be applied to buildings, sculptures, houses or any work that can improve its functionality with movement.

Going back in time, we find a clear example of this type of architecture in the drawbridge used in the Middle Ages, which we can consider one of the most primitive elements of kinetic architecture and which has also reached our days.

However, despite being present in our society for centuries, it was not until the twentieth century that some architects began to be more interested in this architectural concept.

Specifically, the interest in kinetic architecture was one of the pillars of thought of the artistic movement of Futurism born in Italy, where its maxims were progress and movement.

It is also important to note that the development of kinetic architecture goes hand in hand with progress in electronics, mechanics and robotics. Things that began to be more present from 1900 in society.

Thus we have several documents and books of the time that included plans and drawings to move buildings where a notable example was 101 Architectural Fantasies (1933) by Chernikhov.

We know that the concept of kinetic architecture can be used in a statue or a building as we have listed above.

Therefore, understanding how kinetic architecture works and what it is used for to give mobility to a part of a building is key to better understand this type of way of building.

Let’s take a look at 3 aspects that kinetic architecture brings to buildings and why it is a really interesting concept:

Incorporation of a specific function that would not be possible in a static building.

In this example of the use of kinetic architecture we have structures that can move parts to fulfill a second function.

Thus we have the aforementioned drawbridges, which can raise their central sections to allow the passage of ships or vehicles.

It also happens for example with stadiums that have a retractable roof to be closed when it rains, or to be open when the weather is hot.

Kinetic architecture has the power to transform the visual appearance of a building to give it another design or ambiance.

The designs that have moving parts allow to change the visual appearance of a building by moving or rotating some of its parts to another direction and thus in some cases also protect the interior from the sun or cold.

In these cases they fulfill a double function: aesthetic and temperature regulating.

Adaptation and exploitation of environmental conditions.

In buildings where the principles of kinetic architecture have been used, there are often multiple purposes.

For example, the façade of a building can create a hinge or fold effect which, combined with solar utilization technologies, can produce solar energy for autonomous power supply and thus save electricity.

Other examples are the harnessing of motion to transform it into wind energy.

This is what we have for example in the World Trade Center in Bahrain, which has 3 central wind turbines capable of producing up to 15% of the energy needed by the building. 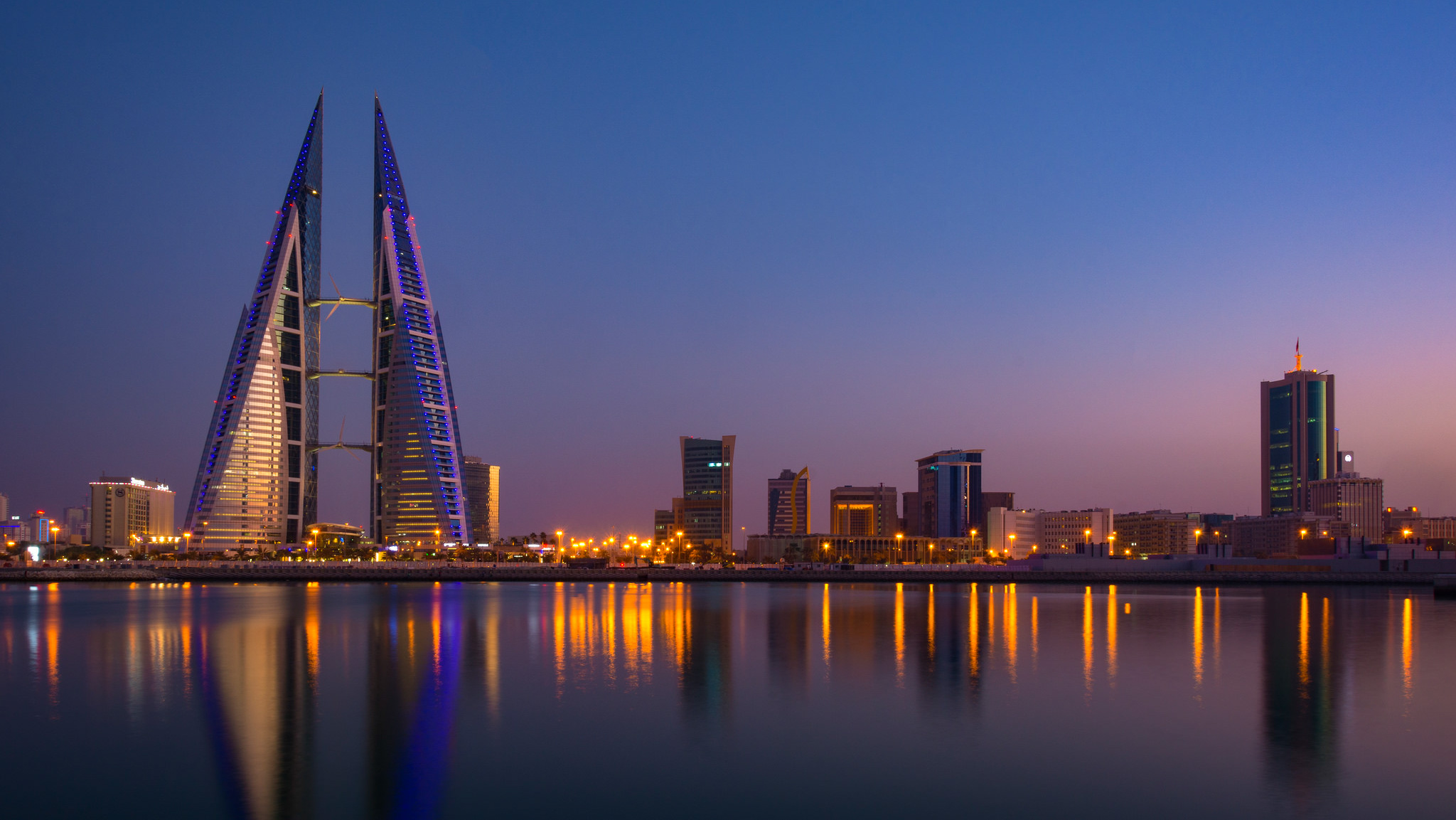 What are kinetic facades?

The kinetic façade is an example of an element within kinetic architecture and can be used to control light, air, energy and even information.

Kinetic facades can among other things reduce the sun’s rays penetrating the building or allow fresh air into the building, thus changing the indoor environment.

The moving façade elements can be programmed to respond to climatic and environmental factors, weather, occupancy level and type, etc., to improve energy efficiency and effectiveness.

Kinetic facades can also be used for aesthetic purposes to create stunning designs or as part of contemporary art exhibitions.

The highlight of kinetic facades is that they often combine aesthetics and utility in a single element, providing an aesthetic design and also fulfilling some function that helps to care for or protect the environment.

As we can understand from the above, in order to achieve functional kinetic facades that can perform their functions, key aspects are lightness, adaptability, variety of finishes and rigidity.

This is achieved thanks to construction elements such as the aluminum composite panel.

The creation of kinetic facades with composite panels is very common because this material provides everything necessary to create them easily.

The aluminum panel is lightweight, formable, strong and insulating, which also helps to achieve the desired energy efficiency when used for that purpose.

In addition, the finishes of the composite panel are very varied and can make combinations of all kinds and simulating almost any material and surface we can imagine.

Kinetic architecture has made it possible to create some of the most impressive buildings in the world.

Here we show you some examples of these so that you can observe the designs and functionalities offered by this type of constructions.

The Milwaukee Art Museum’s most notable feature is its soaring wing-shaped screen at the top of the reception area.

The Burke Brise Soleil (designed by architect Calatrava) is made of steel, has 36 fins, a wingspan of 217 feet and opens and closes twice a day.

During the day, the screen opens to shade the main glass entrance and at night it closes like a bird folding its wings to sleep. 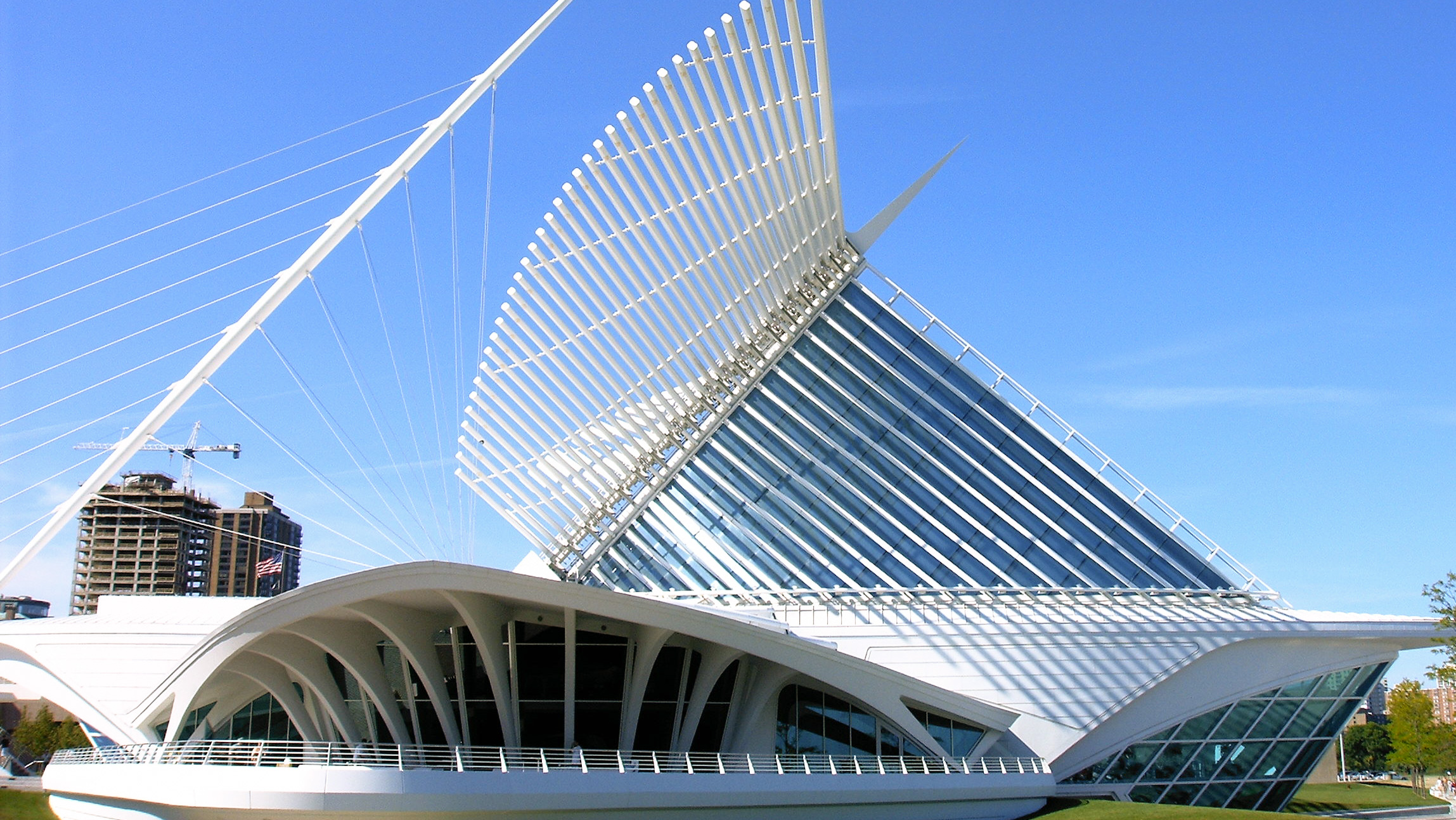 The Bund Financial Center designed by Foster + Partners creates a connection between the old town and the city’s new financial district.

The building is surrounded by a movable curtain, arranged along three lanes and consisting of 675 separate layers of magnesium alloy in the shape of a tassel, a reference to the traditional Chinese wedding headdress, which adapts to the changing use of the building.

The length of the tassels varies, between about 2 and 16 meters, so that as each track moves independently of the other, the veil rotates with the overlapping tassels, creating different visual effects and levels of opacity. 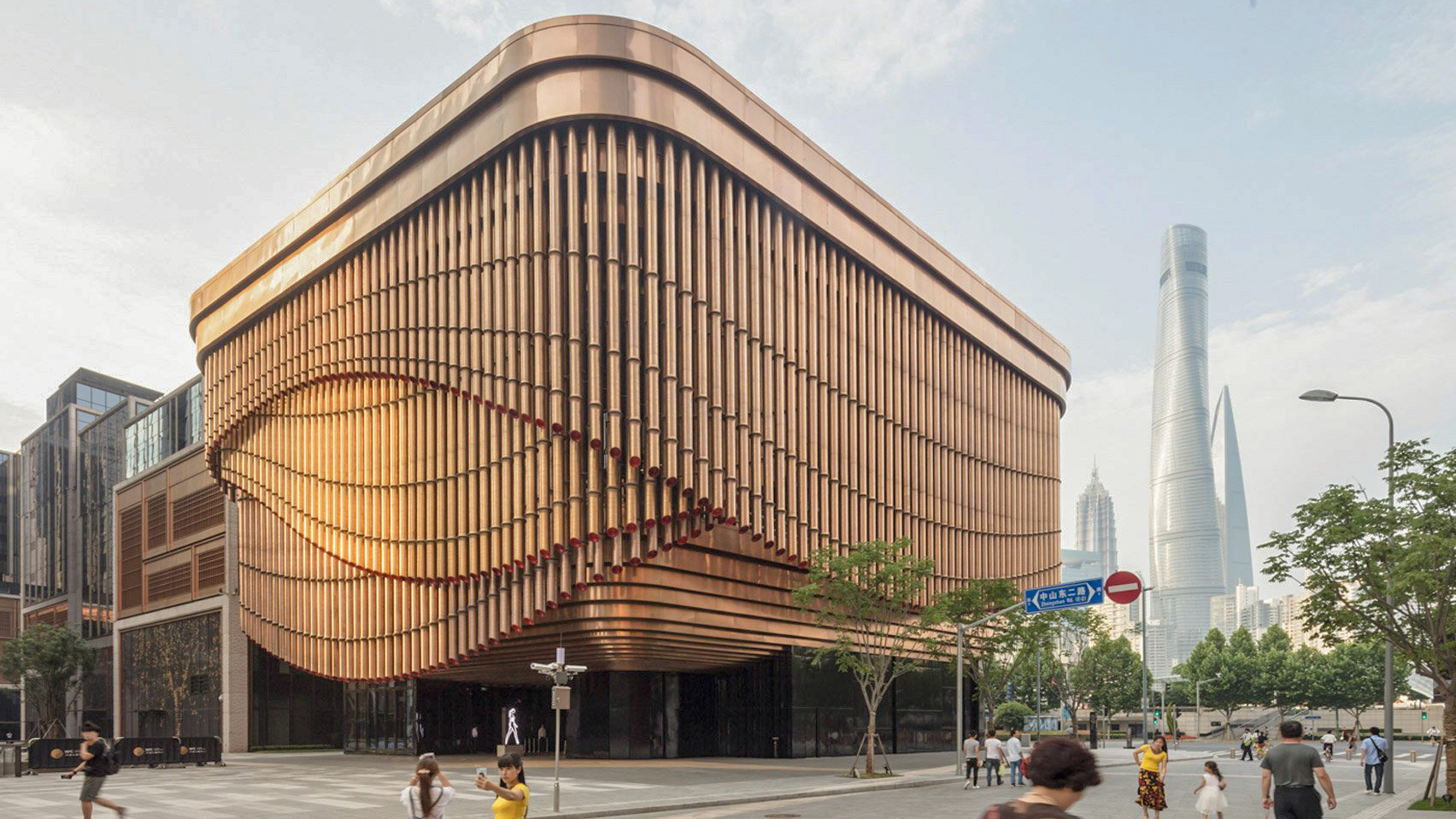 Built by the Austrian studio Soma, it was one of the main installations at EXPO 2012 in Yeosu, South Korea.

The proposal aims to create an iconic landmark that blends into the urban environment and surrounding nature. 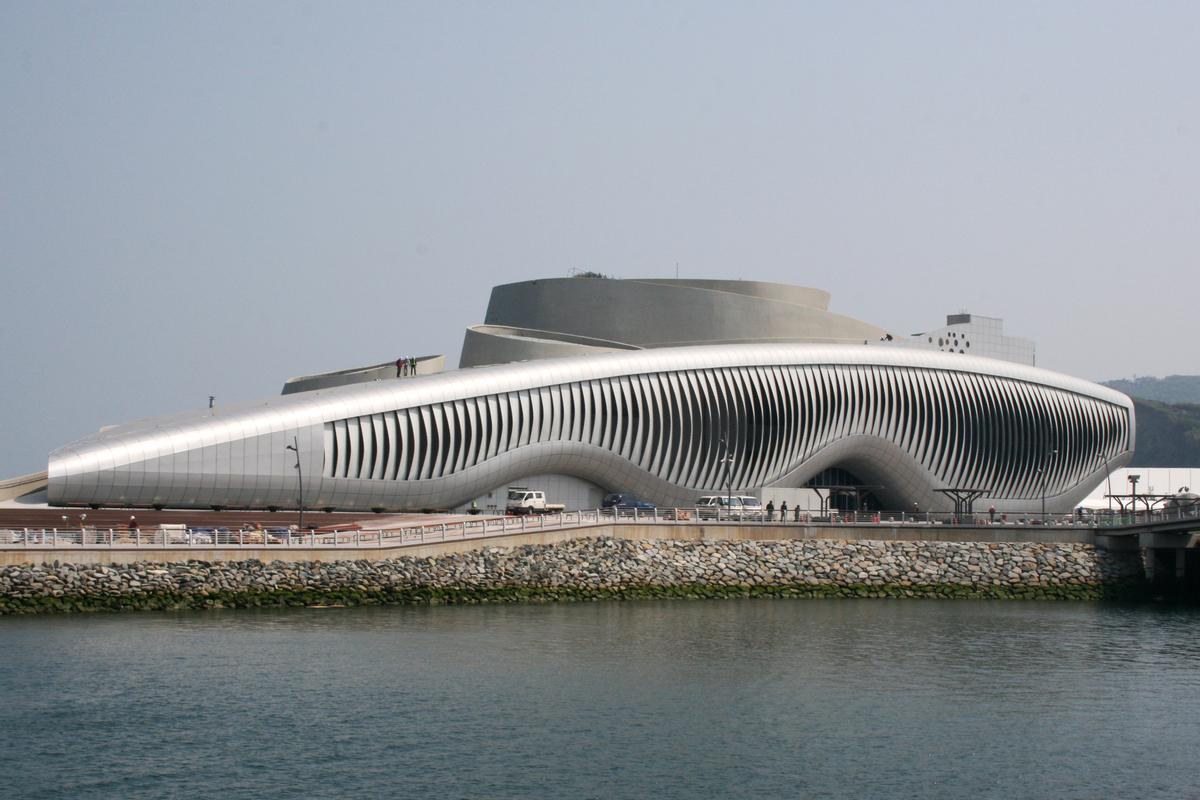 These offices consist of a dynamic façade system of electrically operated folding elements, allowing them to be individually adapted to environmental conditions. 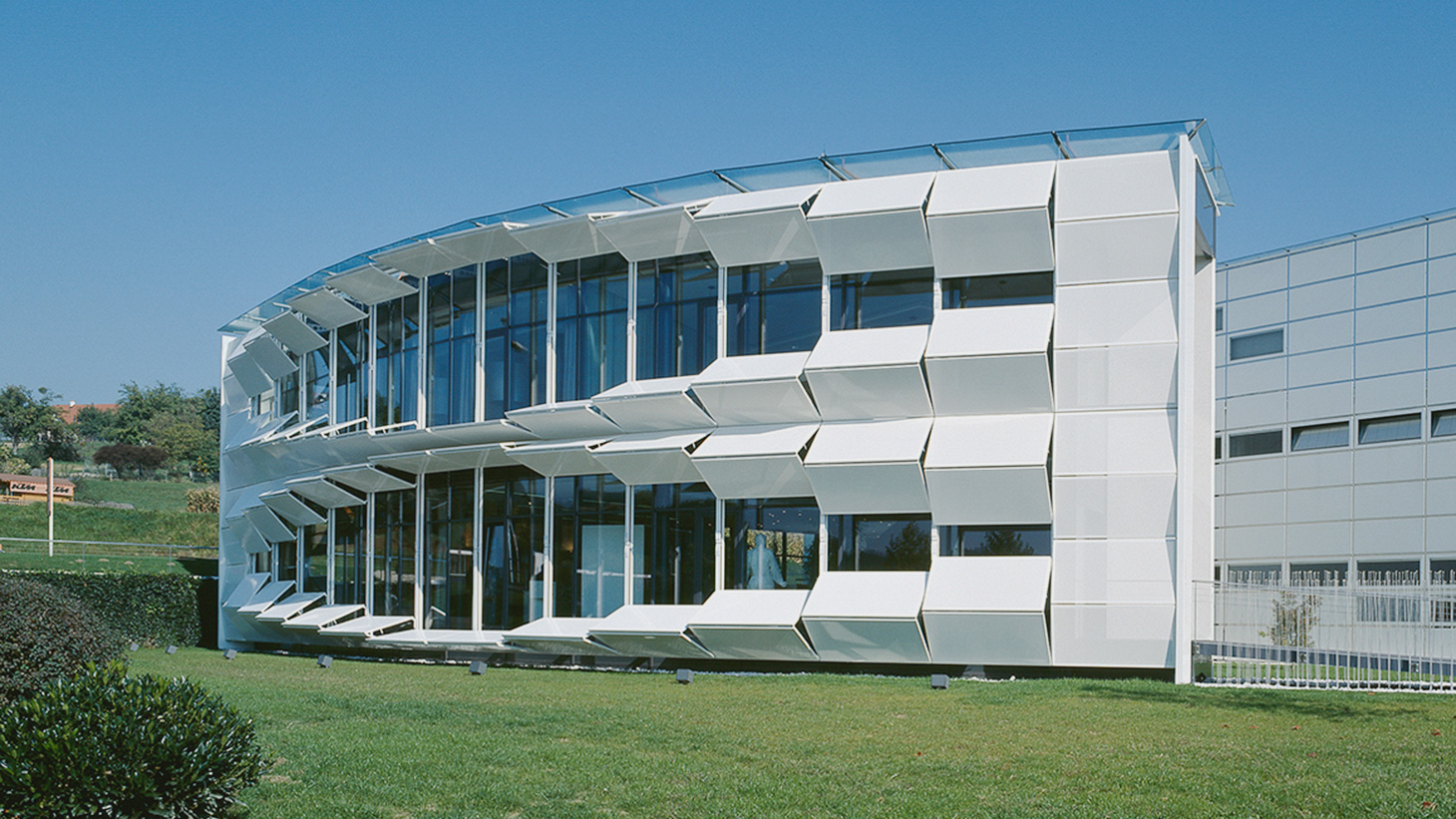 The technological framework of the Al Bahar Towers is inspired by the traditional Islamic architecture known as mashrabiya.

This smart façade is accompanied by a solar thermal collector system and a photovoltaic system on the roof. Thanks to this, the annual reduction in carbon emissions is in the order of 1,750 tons. 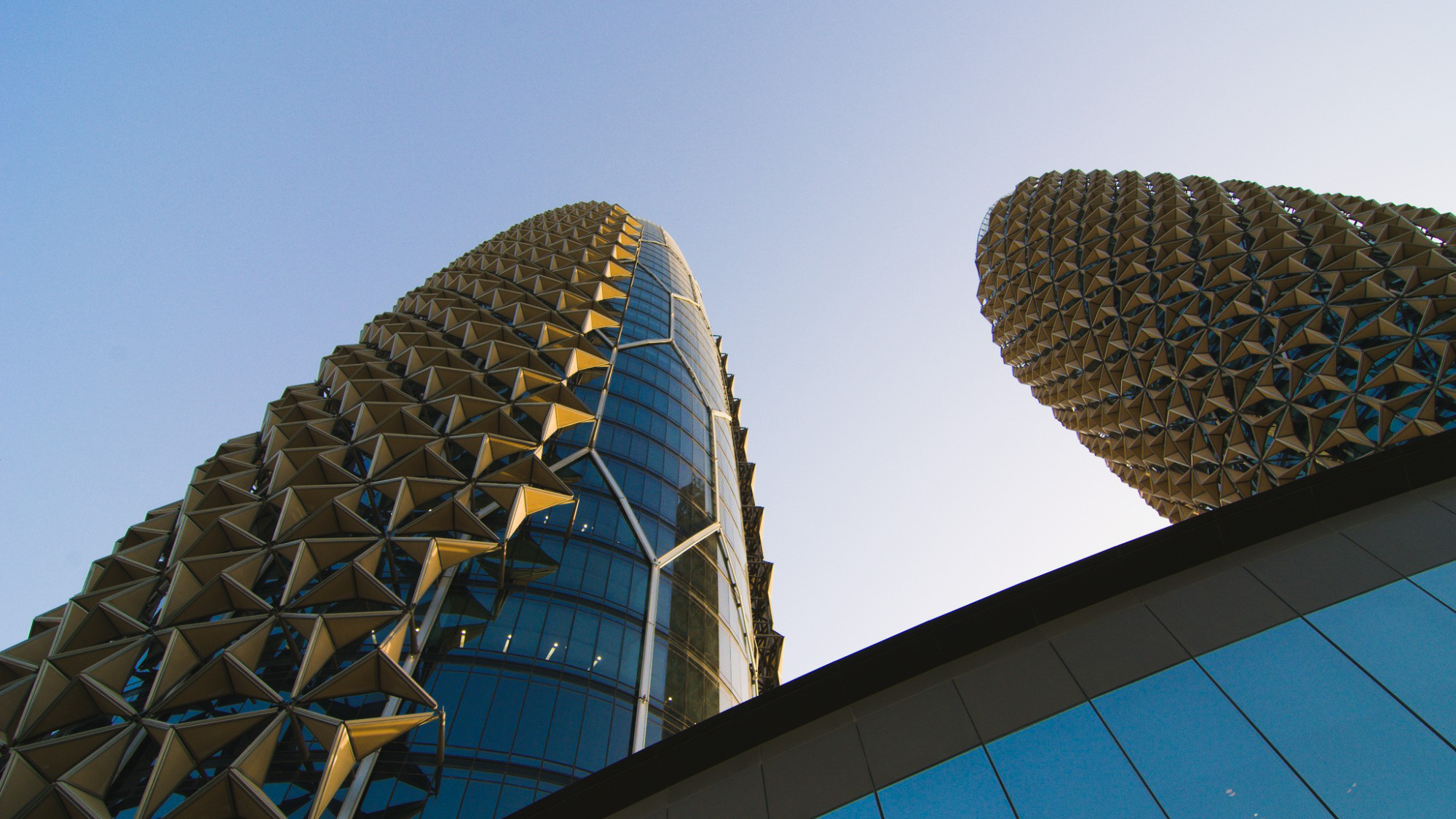 Kinetic architecture, and more specifically kinetic facades, are gaining more and more prominence in today’s architecture, allowing for elegant yet functional designs that give buildings better energy efficiency along with lower environmental impact.